During its long history, Adare, as a strategic location, has been the subject of many conquests, wars and rebellions.

The old town of Adare, which stood on the northern bank of the river Maigue, near the Desmond castle, was destroyed during the 16th century wars. The present village was built in the 19th century.

The early developments were very haphazard but from about 1820, streets and buildings were laid out according to the then Earl of Dunraven’s design. He built houses and rented them, under various agreements, to his tenants, working on his estate lands.

Today, Adare village has a rich wealth of heritage, as well as architectural and scenic beauty. The 5* Adare Manor Hotel and Golf Resort is a luxurious castle hotel situated in the heart of the village. Two groups of world famous, ornate, thatched cottages line part of the village’s broad main street, punctuated with beautiful stone buildings, medieval monasteries and ruins.

While vacationing in Ireland, stop on your way through and visit the many ruins and buildings steeped in history including:

Desmond Castle was built in the 13th century with an ancient ring fort and became a strategic fortress during turbulent times.  It was in the proprety of the Earls of Kildare for 300 years until 1536 when it was granted to the Earls of Desmond from whom it earned its present name.

The Franciscan Friary is a typical example of the monasteries erected during the 14th century. Located over the river maigue to Adare Golf Club, now in ruins the walls still show the outline of a remarkable building.

The Trinitarian Priory is located near the Adare Heritage centre and is the only known Trinitarian monastery in Ireland. It was built by the Fitzgeralds for the Trinitarian order of Monks, who it is believed came from Scotland in the 13th century. The Priory was damaged badly during the reign of King Henry VIII and repaired in the 19th century.  Today the building now stands as the Holy Trinity Abbey, a roman catholic church.

The Augustinian Priory was built on the banks of the river maigue and is just a short walk from Adare as you head towards Limerick. It was the home of the Augustinian Order until they were driven out and was founded by the Earls of Kildare. It was repressed by King Henry VIII and repaired in the 19th century. The Priory is a perfect example of what churches looked like in medieval times.  It is now used as the local Protestant church (Church of England) since the 19h century. 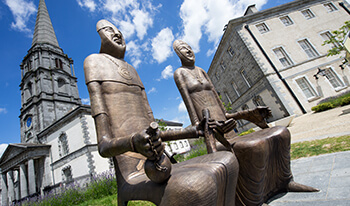 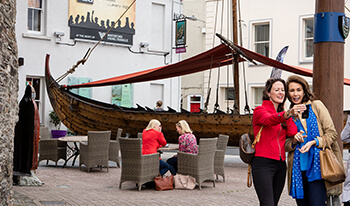