Blarney Castle is a medieval stronghold in Blarney, near Cork, Ireland. It is near the River Martin. The castle originally dates from before AD 1200. It was destroyed in 1446, but subsequently rebuilt by Cormac MacCarthy, the King of Munster. It is currently a partial ruin with some accessible rooms and the battlements. There are many legends as to the origin of the stone, but some say that it was the Lia Fáil—a magical stone upon which Irish kings were crowned.The Blarney Stone is a block of bluestone built into the battlements of Blarney Castle, Blarney about 8 km from Cork, Ireland. According to legend, kissing the stone endows the kisser with the gift of gab (great eloquence or skill at flattery). The stone was set into a tower of the castle in 1446. The castle is a popular tourist site in Ireland, attracting visitors from all over the world to kiss the Stone and tour the castle and its gardens.

The word blarney has come to mean clever, flattering, or coaxing talk.The stone is believed by some to be half of the original Stone of Scone, and said to have been presented to Cormac McCarthy by Robert the Bruce in 1314 in recognition of his support in the Battle of Bannockburn.

The proprietors of Blarney Castle list several alternative explanations for the origins of the Stone and its supposed powers, all of which suppose that the Stone had previously been in Ireland but was then taken to Scotland and returned to Ireland in 1314. The stories they list include:

The Stone was the stone that Jacob used as a pillow, and was brought to Ireland by the prophet Jeremiah The Stone was the pillow used by St. Columba of Iona on his deathbed The Stone was the Stone of Ezel, which David hid behind on Jonathan's advice, while fleeing from King Saul, and may have been brought back to Ireland during the Crusades The Stone was the rock that Moses struck with his staff to produce water for the Israelites, during their flight from Egypt in Ireland, the Stone was known as the Lia Fáil or "Stone of Destiny", part of the king's throne, with mysterious powers The stone's powers were revealed to the McCarthys by a witch who had been saved from drowning.

Surrounding the castle are beautiful and quite extensive gardens. There are paths touring the grounds with signs pointing out the various attractions such as several natural rock formations which have been given fanciful names, such as Druid's Circle, Witch's Cave and the Wishing Steps. Blarney House, a Scottish baronial-style mansion, was built on the grounds in 1874. It is also open to the public. 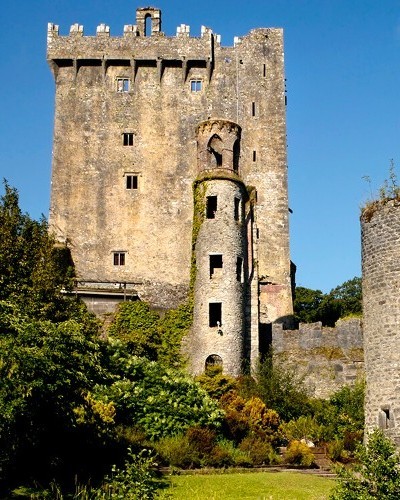