Bunratty Castle (Irish: Caisleán Bhun Raithe, meaning Castle at the Mouth of the Ratty) is a large tower house in County Clare, Ireland. It lies in the centre of Bunratty village (Irish: Bun Ráite), by the N18 road between Limerick and Ennis, near Shannon Town and its airport. The name Bunratty, Bun Raite (or possibly, Bun na Raite) in Irish, means the 'bottom' or end of the 'Ratty' river. This river, alongside the castle, flows into the nearby Shannon estuary. From the top of the castle, one can look over to the estuary and the airport.

Bunratty Castle is now a very popular tourist attraction. The interior has been furnished by Lord Gort with tapestries and artifacts from various eras in the castle's history. Some of the sights include the 'great hall', dungeons and four towers with spiral stairwells. Medieval-style banquets are held twice every evening in the great hall. The castle is also a popular attraction for wedding parties from the closest main city of Limerick hoping to make their special day even better with the beautiful surroundings.

Bunratty Folk Park: Rose Cottage at the Folk ParkAlongside the castle is an extensive folk park, particularly popular with families, tourists and schools. This features reconstructions of historical cottages and buildings, recreating the general feel of the 19th century with a period style village main street. Old tools, furniture and artefacts are displayed, with the village kept alive by some inhabited shops, an old home bakery and peat fires in cottages.

Key events in Bunratty's history include: The first dwellings to occupy the site, in 970 were part of a Viking trading camp. In 1270, Robert De Muscegros built the first defensive fortress, known as a motte and bailey castle. These lands were later granted to Thomas de Clare, who built the first stone structure on the site. At this time Bunratty town had grown to a population of 1,000. In 1318, Thomas's son Richard de Clare, Steward of Forest of Essex (new holder of the castle) was killed in the Battle of Dysert O'Dea during the Irish Bruce Wars 1315-1318. The castle and town were completely destroyed by the victorious O'Briens. In 1332, soon after being restored for the King of England, the castle was once again razed by the Irish Chieftains of Thomond under the O' Briens and the MacNamaras. In 1353, after lying in ruins for 21 years, it was rebuilt by Sir Thomas Rokeby, but was almost immediately attacked again by the Irish and was held by Irish hands thereafter. The present structure was completed by the MacNamara family around 1425 but 50 years later was in the hands of the O'Briens, the most powerful clan in Munster. In 1646, during the Irish Confederate Wars, Barnaby O'Brien, the Earl of Thomond, allowed a large English Parliamentary garrison to land in Bunratty. The castle was besieged and taken by the forces of Confederate Ireland under Donagh MacCarthy, Viscount Muskerry. When Barnaby, or Barnabas O'Brien, 6th Earl of Thomond, left Bunratty for England in 1646 for his own safety, during the Confederate wars, he was the last member of the O'Brien Clan ever to reside in Bunratty Castle. He was actually christened Brian O'Brien, after his famous ancestor Brian Boru, but being a political gymnast, he preferred a more English appellation to appease the King, and to be socially acceptable in the climate of the time. Bunratty Castle and its lands were granted to the Studdert family. They left the castle in 1804 (allowing it to fall into disrepair), to reside in the more comfortable and modern adjacent Bunratty House built by the family. The reasons for the move are bound up in family arguments over the eldest son marrying his first cousin. Both the castle and house are open to the public. In 1954 the castle was purchased and restored by the 7th Lord Gort. He reroofed the castle, which had no longer been lived in as much at the time, and saved it from ruin. 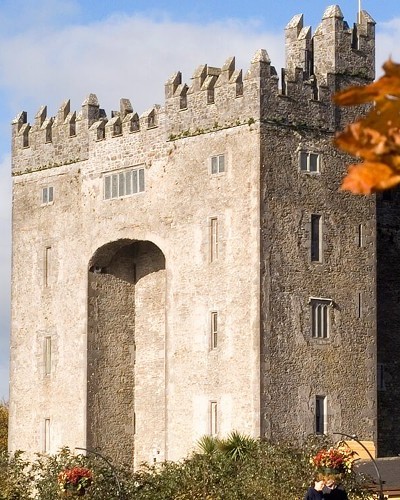