The monastery of Clonmacnoise (meaning  Meadow of the Sons of Nós) is situated in County Offaly, Ireland on the River Shannon south of Athlone. It was visited by the Pope in 1979. The site can be visited for a fee, via an Interpretative Centre.

Clonmacnoise was founded in 546 by Ciarán, a young man from Rathcroghan, Co. Roscommon. Until the 9th century it had close associations with the kings of Connacht. The strategic location of the monastery helped it become a major centre of religion, learning, craftsmanship, and trade. The site includes the ruins of a cathedral, seven churches (10th -13th century), two round towers, three high crosses and the largest collection of Early Christian graveslabs. The site also includes original high crosses.

Amongst the many remains at Clonmacnois are two complete High Crosses plus the shaft of another. The most famous, the Cross of the Scriptures, also known as King Flann's Cross, is the centre-piece of the new interpretive centre. The crosses were moved from their original positions in 1991 into the new centre and superb replicas were placed outside in the original positions. Pictured right is the west face of the Cross of the Scriptures. This cross is decorated with figure sculpture on all four sides. The Cross of the Scriptures was mentioned twice in the annals of the Four Masters, first in 957 and later in 1060. At the centre of the head on East face is the Last Judgement, and at the top of the East shaft is a panel showing Christ with Peter and Paul. Below this panel are two more panels bearing iconography that are still open to interpretation. On the base are three riders facing left and two chariots facing right. At the bottom of the shaft is an inscription that has now become almost impossible to see.

The South cross is very similar to the Ahenny ornamental crosses and the stone crosses on Iona in Scotland, in that it too is a skeuomorphic representation of a wooden cross. The raised bosses represent the studs that would have kept the wooden crosses together, with the hatched moulding along the edges representing the metal plates encasing the wood. The Cross bears a crucifixion scene on the west side of the shaft, which is believed to mark a transition to the scriptural crosses. On the eastern side of the shaft is a panel with a vine and birds. The triple-stepped base of the cross represents the Rock of Golgotha and bears quite a of worn carvings. The southern side has iconography in the left hand panel showing the Fall of Man. Although the western side of the base is much worn, you can make out a procession of horsemen.

In the modern day, the site stands as a preserved ruin under the management of the Office of Public Works. An interpretive centre and facilities for visitors have been built around the site, which is open to the public for a fee. The graveyard surrounding the site continues to be in use and religious services are held regularly on the site in a modern chapel.

The long and varied history of Clonmacnoise is recounted in an audio-visual presentation shown in the visitor centre. There are also exhibitions that deal with the flora, fauna and landscape of the region. 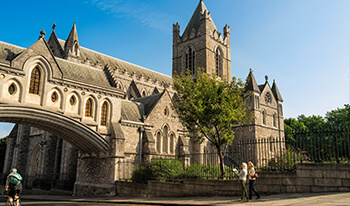 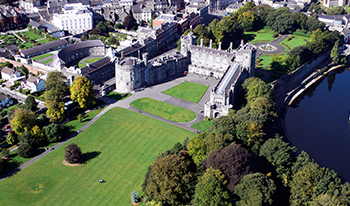 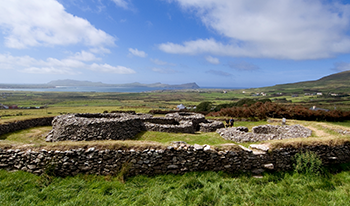