There are so many things to see, to do, to explore, to experience on the Dingle Peninsula . . . from almost 2,000 archaeological sites, to more walking than you could fit into a year, to Fungie, a bottlenose dolphin who's been living at the mouth of Dingle Harbour since 1984.

There is no other landscape in western Europe with the density and variety of archaeological monuments as the Dingle Peninsula. This mountainous finger of land which juts into the Atlantic Ocean has supported various tribes and populations for almost 6,000 years. Because of the peninsula's remote location, and lack of specialised agriculture, there is a remarkable preservation of over 2,000 monuments.

It is impossible to visit the Dingle Peninsula and not be impressed by its archaeological heritage. When one combines each site's folklore and mythology, which have been passed orally from generation to generation through the Irish language, one can begin to understand how unique and complex is the history of this peninsula. The peninsula exists because of the band of sandstone rock that forms the Slieve Mish mountain range at the neck of the peninsula, in the east, and the unnamed central mountain range further to the west. Ireland's highest mountain outside Macgillycuddy's Reeks, Mount Brandon at 951 m, forms part of a beautiful high ridge with stunning views over the peninsula and North Kerry.

The Conor Pass, which runs from Dingle on the southern end of the peninsula towards Brandon Bay and Castlegregory in the North, is the highest mountain pass in Ireland, a tight, precarious road, weaving its way around the sharp cliff faces and past the high corrie lakes.

The Blasket Islands lie off the west coast. They are famous for the literary and linguistic heritage of the former inhabitants. However, these remote islands have been uninhabited since the 1950s following an evacuation.

The western end of the peninsula is a Gaeltacht area that has produced a number of nationally notable authors and poets; Ó Siochfhradha and Peig Sayers among others. This is the most western part of Ireland, and the village of Dún Chaoin is often jokingly referred to as "the next parish to America". 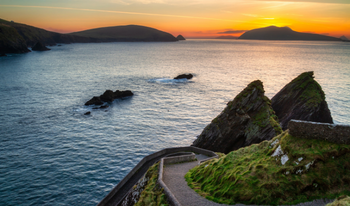 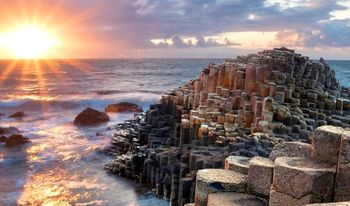