Situated in the south west of Ireland, Adare is one of Ireland's prettiest and most picturesque villages and is a haven for those wishing to escape and unwind taking in its medieval surroundings. Adare's streets are lined with original thatched cottages survived for hundreds of years. Some of the cottages are kept by local restaurants and Arts & Crafts shops, but many are still privately owned. Other famous attractions in this quaint town include; Desmond Castle, the Franciscan Friary and the Trinitarian and Augustinian Priories.

Cork contains some of Ireland's most beautiful scenery, historic sites and locations and it is easily accessible from Adare. Your day trip today will take in the famous Blarney Castle where you can take the kids to kiss the renowned Blarney Stone which is said to grant the ‘gift of the gab’! Your Irish Tourism detailed itinerary will help you explore the town of Cobh which was the last port of call for the ill-fated titanic in 1912 and is also the gateway to the prominent Spike Island which has hosted a monastery, a fortress and a prison within its 104 acres.

Day Trip 3: The Ring of Kerry

Kerry is one of Ireland’s most visited locations and this is due to the many beautiful beaches, spectacular scenery and the fine array of family activities to enjoy. Nearby the town of Killarney you and your kids will find an expanse of rugged mountainous countryside, including the McGillycuddy Reeks which rise to a height of over 1000 metres and at the foot of these marvellous peaks you will find the world famous Lakes of Killarney and the Killarney National Park. Here you might enjoy a jaunt by traditional horse and cart or if you are feeling adventurous, hire some bicycles and enjoy cycling around the vast expanse. Muckross House, Gardens and Traditional Farms is another family favourite. Should you choose to venture past Killarney, the Ring of Kerry is an unforgettable journey not to be missed and en-route you will appreciate stunning mountain and coastal scenery combined with colourful towns and villages.

One of your longest but most dramatic days of your tour brings you from Adare along the west coast of Clare to Galway City, Ireland’s festival capital & City of the Tribes! Clare has it all, from beautiful beaches like the popular surfing beach in Lahinch and horseshoe shaped sandy beach of Kilkee to breath-taking scenery and charming, welcoming people.  Before you leave Clare, The Cliffs of Moher are a must see!  The majestic Cliffs of Moher are without doubt one of Ireland’s most spectacular sights and overlook the Atlantic Ocean on the coast of West Clare. The Cliffs lay claim to one of the most astonishing views in Ireland and on a clear day the Aran Islands are visible in Galway Bay as well as the rustic valleys and hills of the Connemara region. From here, Galway City is a short drive. Places of interest include Galway City Museum, Galway Cathedral, Galway Aquarium or the Nora Barnacle House to name but a few.

Dingle peninsula is dominated by the range of mountains that form its spine, running from the Slieve Mish Mountains to Mount Brandon, Ireland's second highest peak. The coastline consists of striking cliffs, broken by sandy beaches, with two beautiful beaches at Inch in the south and the Maharees to the north. The Blasket Islands come into full view at Slea Head; great humps of old red sandstone sprawled in the Atlantic, two miles beyond the westernmost tip of the peninsula. Ireland’s most friendly Dolphin, Funghi has been living in Dingle Bay since 1983, and your kids would certainly enjoy a boat trip to see him. These trips can be booked easily from Dingle Harbour.

Cashel was once the seat of the Kings of Munster and capital of this southern province. The Rock, which rears above the plain, dominated the land routes southwards. Kings of Ireland as well as Munster came to this spot and St. Patrick is known to have preached on the rock and converted the local King, Aenghus, here in the 5th Century. Not far away Cahir Castle was once an important stronghold of the powerful Butler family and it retains its impressive keep, tower and much of its original defensive structure. It is one of Ireland’s largest and best-preserved castles. Kilkenny City is long renowned as Ireland’s Medieval Capital, the city’s origins date back more than 1,500 years.

The journey from Adare to Dublin is approximately three hours but there are places where you may wish to stop en-route. The National Stud for example comprises three separate attractions. The 1,000 acre Farm at Tully has been in use as a Stud Farm since 1900. There is a Horse Museum tracing the history of the horse in Ireland using artefacts, illustrations and text and the Japanese Gardens situated in the grounds were the first of their kind in Ireland and in Europe. On arrival in Dublin, explore all that this cosmopolitan city has to offer using your Irish tourism detailed itinerary as your sightseeing guide! 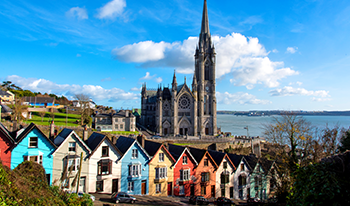