This little town is world-famous due to its exquisite location beside lakes and mountains.Take a horse-drawn jaunting car ride through the grounds of the Killarney National Park to Muckross House and Gardens. Tour the house with a local guide to learn about the history and lifestyles of previous owners and perhaps stroll through the gardens on the shores of Muckross Lake. As well as being a perfect location from which to explore the south western region of Ireland, for centuries the Killarney Valley has been recognised far and wide as Ireland's most beautiful destination - being aptly titled as "Heaven's Reflex".

It inspired Poet Laureate Alfred Austin to write - "If mountain, wood and water harmoniously blent, constitute the most perfect and adequate loveliness that nature presents, it surely must be owned, that it has, all the world over, no superior". Prepare to be amazed by the Incredible Beauty, Rich History & Heritage, Myths & Legends and Wonderful Culture & Traditions of this special place.

Killarney National Park is located beside the town of Killarney, County Kerry, Ireland. It was the first national park established in Ireland, created when Muckross Estate was donated to the Irish state in 1932. The park has since been substantially expanded and encompasses over 102.89 km2 (25,425 acres) of diverse ecology, including the Lakes of Killarney, Oak and Yew woodlands of international importance, and mountain peaks. It has Ireland's only native herd of Red Deer and the most extensive covering of native forest remaining in Ireland. The park is of high ecological value because of the quality, diversity, and extensiveness of many of its habitats and the wide variety of species that they accommodate, some of which are rare. The park was designated an UNESCO World Biosphere Reserve in 1981.

Muckross House (Irish: Theach Mhucrois) is located on the small Muckross Peninsula between Muckross Lake and Lough Leane, two of the lakes of Killarney, 6 kilometers (4 mi) from the town of Killarney in County Kerry, Ireland.

Muckross House is a mansion designed by the Scottish architect, William Burn, that was built in 1843 for Henry Arthur Herbert and his wife, the watercolourist Mary Balfour Herbert. With sixty-five rooms, it was built in the Tudor style. Extensive improvements were undertaken in the 1850s in preparation for the visit of Queen Victoria in 1861. It is said that these improvements for the Queen's visit were a contributory factor in the financial difficulties suffered by the Herbert family which consequenced in the sale of the estate.

Torc Mountain is a mountain near Killarney in County Kerry, Ireland which is 535 m high. Torc Mountain gets its name from an enchanted boar that was killed there by the legendary hero, Fionn mac Cumhaill. 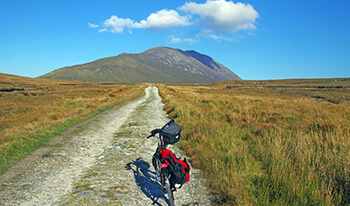 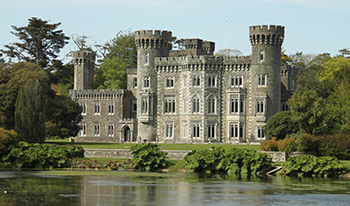