The medieval town of Kinsale is not just about food, it’s also about traditional bars, beautiful buildings, narrow streets, shops and galleries and lots of activities on land and sea. You'll find Kinsale's not just a place - it's more a state of mind!

Drive to Kinsale, a delightful old town on a narrow inlet of the sea. Formerly a fishing and merchant town, today it is popular for sailing and gourmet food. Join a local guide for a short walking tour to see some historic places. Start at Charles Fort to understand the importance of Kinsale’s location for trading and defense and then walk around some of the old streets.

Kinsale can easily claim its place amongst Ireland's most historic locations for this has been a centre of population, commerce, trade and fishing far beyond memory and record. In its earliest days the estuary of the Bandon River gave it great importance as the river is tidal as far as Innishannon and water transport was dominant until the 18th Century.

The estuary also provided excellent anchorage for ancient shipping which went in peril of the vagaries of the weather.

The Town nestles between the hills and the shoreline, a maze of narrow streets, never far from the water and little changed in many hundreds of years. Amongst buildings of later periods are those of another age with historical links to the French, Spanish, British and Americans.

In 1601, Kinsale was the site of a battle in which English forces defeated an Irish/Spanish force, led by the princes Hugh Roe O'Donnell and Hugh O'Neill. Following this battle the Flight of the Earls occurred in which a number of the native Irish aristocrats, including the Earls of Tyrone and Tir Conaill abandoned their lands and fled to mainland Europe.

In 1690, James II of England & Ireland, following his defeat at the Battle of the Boyne, departed to France.

Charles Fort, located at Summer Cove and dating from 1677, is a fortification that guards the entrance to Kinsale harbour. It was built to protect the area and specifically the harbour from use by the French and Spanish in the event of a landing in Ireland. James's Fort is located on the other side of the cove, on the Castlepark peninsula. An underwater chain used to be strung between the two forts across the harbour mouth during times of war to scuttle enemy shipping by ripping the bottom out of incoming vessels.

When the RMS Lusitania was sunk by a German U-boat on May 7, 1915, some of the bodies and survivors were brought to Kinsale and the subsequent inquest on the bodies recovered was held in the town's courthouse. A statue in the harbour commemorates the effort. 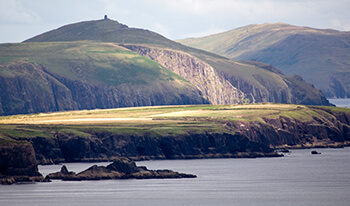