Visit Kylemore Abbey, a 19th century mansion with an exquisite chapel and reception rooms. The Abbey is the oldest of the Irish Benedictine Abbeys. It is a Benedictine monastery founded in 1920 on the grounds of Kylemore Castle, in Connemara, County Galway, Ireland. The abbey was founded for Benedictine Nuns who fled Belgium in World War I.

At Kylemore, the nuns opened their international boarding school and established a day school for local girls. They also ran a farm and guesthouse; the guesthouse was closed after a devastating fire in 1959. A section of the Abbey (the enclosure) is retained strictly for the nuns’ use and is not open to the public; here the nuns devote themselves to their monastic life of prayer and work.

Originally called Kylemore Castle, it was built between 1863 and 1868 as a private home for the family of Mitchell Henry, a wealthy politician from Manchester, England who was also MP for Galway County from 1871 to 1885. After the death of his wife Margaret in 1875, Mitchell did not spend much time there. He and his wife are both buried in the small mausoleum near the church in the grounds of the abbey. Notable features of the abbey are the neo-Gothic church (built between 1877 and 1881), a miniature replica of Norwich Cathedral, made from local green Connemara marble, and the Victorian walled garden. 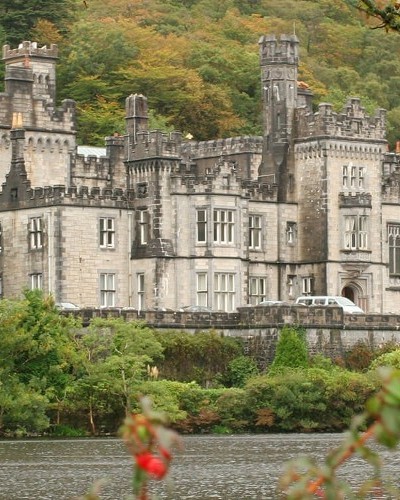