Lismore Castle is located in the town of Lismore, in County Waterford in Ireland. It was largely re-built in the Gothic style during the mid-nineteenth century by William Cavendish, 6th Duke of Devonshire.

The castle site was originally occupied by Lismore Abbey, an important monastery and seat of learning established in the early 7th century. It was still an ecclesiastical centre when Henry II, King of England stayed here in 1171, and except for a brief period after 1185 when his son King John of England built a 'castellum' here, it served as the episcopal residence of the local bishop.

The castle passed to Sir Walter Raleigh in 1589 and Raleigh sold it to Richard Boyle, Earl of Cork, in 1602. He immediately set about fashioning the countryside round Lismore in the English way, with stocked deer parks, fruits orchards, fish ponds and other features of the English Lordly manor estate. In 1753, the castle passed to the 4th Duke of Devonshire on his marriage to Lady Charlotte and the present castle is still owned by the Devonshires. Although the castle is NOT opened to the public, the Lismore Castle Gardens can be visited. 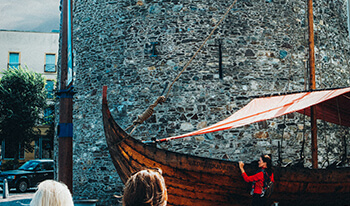