The lands around Tully have been associated with the breeding of horses since about 1300, when it is likely that war horses were bred here for the Knights of Malta.

However, the first record of the setting up of a stud farm is in 1900, when the lands were purchased from a local farmer James Fay, by Colonel William Hall-Walker, who later became Lord Wavertree.

As 'Willie' Walker approached middle age, he turned his attention to the owning and breeding of racehorses, quickly turning the farm at Tully into one of the best studs in Europe at the time.

He succeeded in building up a collection of foundation mares which had tremendous influence on racing. In the ten year period of 1904 - 1914 there were seven classic winners bred at Tully including Minoru (Derby and 2000 Guineas), Prince Palatine (St. Leger and Ascot Gold Cup ) and Cherry Lass (Oaks and 1,000 Guineas).

During this period Colonel Hall Walker also decided to have a Japanese Garden built on a boggy site near Tully House. The Garden was laid out by an eminent Japanese landscape gardener Tassa Eida, assisted by an army of local labourers.

The Gardens, planned to symbolise the 'Life of Man', are now of international renown and are acclaimed as the finest Japanese Gardens in Europe.

The gardens at Tully are a living monument to the meeting of Eastern and Western cultures in a Western setting. The symbolism of life the garden portrays traces the journey of a soul from Oblivion to Eternity and the human experience of its embodiment as it journeys by paths of its own choice through life. Typical ambitions toward education, marriage, or a contemplative or carefree life, achievement, happy old age and a gateway to Eternity are portrayed. Furthermore as an example of Japanese Gardening of its period, it is perfect - a Japanese Garden with a hint of Anglicisation about it, was precisely the type of garden being made in Japan at that time.

Eida remained at Tully until 1912. He and his wife and two sons, Minoru and Kaiji, lived at Curragh House, which is now the Racing Apprentice Centre of Education. The name Minoru which means 'light of my eye' or the 'favourite one' was chosen by Colonel Hall-Walker for his favourite Tully-bred colt. 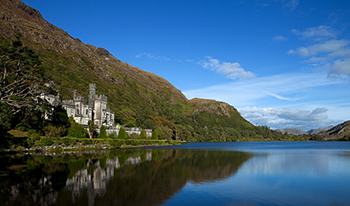