The Ulster American Folk Park is an open-air museum in Castletown, just outside Omagh, in County Tyrone, Northern Ireland. The Park explores the historical link between Ulster and America, focusing particularly on the lifestyle and experiences of those immigrants who sailed from Ulster to America in the 18th and 19th centuries. It is one of three national museums of Northern Ireland.

The Folk Park provides a living history experience with historic buildings transported from all over Ulster, expertly reconstructed and authentically furnished, while demonstrators in period costumes go about their everyday tasks, illustrating what life was like in Ulster centuries ago. There are around 30 exhibits in total, recreating the old world of Ulster and the new world of the US in the 18th and 19th Centuries from rustic Weaver's Cottages, homesteads and a typical Ulster Street to a Pennsylvania Log House brought from Greene County and an American Street based on 19th Century Boston with a replica First Mellon Bank.

Contained within the park are around thirty buildings — some recreations, some painstakingly-restored originals. There are agricultural displays and animals on site, and visitors are offered samples of various local foods such as smoked salmon and bread, freshly-cooked in the cottages that line the route of Park tours.

The park is open throughout the year, excluding some public holidays.

The museum is themed, with volunteers dressed in period costume, often demonstrating techniques used in day-to-day tasks and occupational skills such as bread making, cooking, arts and crafts, embroidery, spinning, printing and so on. Events are marked which cover the culture of both the New World and the Old World, such as Independence Day and Halloween. Festivals often take place including Saint Patrick's Day, Appalachian, Bluegrass, Irish folk music and dancing demonstrations. Exhibitions are often scheduled to promote cultural awareness, such as Hands Across the Border.

The Ulster-American theme is highlighted by the layout and the information relayed, such as the fact that over two million people left Ulster for North America between the years 1700 and 1900.

The Old World region includes whole streets of original houses, an original printing press, a bank, an old police barracks, the old Castletown National School, and two churches. Central to this region is the boyhood home of Thomas Mellon, judge and founder of the Pittsburgh banking dynasty. Some of the two-up, two-down houses in one of the reconstructed streets in the Park were transported in their entirety from Sandy Row, off the Donegall Road in Belfast, and other buildings have been transported from elsewhere in the province.

Linking the Old and New World sections of the park is the Ship and Dockside gallery, which includes the Brig Union, a full-size replica of an immigrant sailing ship. The themed atmosphere continues in the New World area, which features log cabins from Pennsylvania and Boston, and reconstructions of everyday scenes from the lives of newly-arrived immigrants. 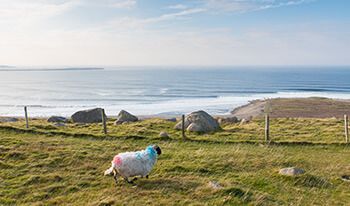