From $1,938 land only - Book now and save 5% on all departures - Traditional Scottish Evening, a banquet at Cardiff Castle, Sightseeing in London, Windsor Castle, York Walking Tour, The Beatles Story in Liverpool and a visit to Stonehenge..

Stay at the following (or similar):

Your vacation starts at your Windsor hotel at 2:30 pm when you meet your tour director. Close to your hotel, visit Windsor Castle, residence of The Queen and the largest inhabited castle in the world. Meet your tour director and trip participants over a welcome drink before dining in your hotel. After dinner take a brief walk around this compact and historic town with a local guide. (D)

Head out into the English countryside today and travel through the delightful Cotswolds. This region developed during the Middle Ages when the wool produced was vital to the thriving economy. Most of the villages date back centuries and are built in the local warm-toned stone. Stop in Bampton where “Downton Abbey” village scenes were filmed. Drive to Stratford-upon-Avon and, in the center of this attractive town, visit Shakespeare’s Birthplace to see an exhibition about his life and work. Enter the actual house where he was born to see rooms furnished as they would have been in his day. Drive north to Yorkshire and check in to your hotel in York. (B, D)

Take a walking tour through medieval streets to see black and white half-timbered houses. Stroll along the Shambles, one of the city’s narrowest alleyways where the overhanging upper floors almost form an arch across the street. Tour the stately York Minster, which towers over the old city. It is built in Gothic style and is renowned for magnificent medieval stained glass windows. Travel north, passing some portions of Hadrian’s Wall, and pause in Jedburgh to view its picturesque abbey ruins. Continue through the hilly countryside of the Scottish Borders to Edinburgh where your hotel is set in spacious grounds a few miles outside the city. Enjoy a lively Scottish Evening with dinner and entertainment right in your hotel. (B, D)

Explore central Edinburgh this morning, starting in the 200-year-old “New Town” with its planned streets and elegant Georgian houses where many famous writers and inventors lived. View Princes Street, the city’s premier shopping street. See the Royal Mile where the medieval houses are clustered closely together with some as high as 11 floors. Tour the massive Edinburgh Castle to see the Crown Jewels of Scotland and the Stone of Destiny and enjoy great panoramic views from the ramparts. The afternoon is free for independent activities. You may like to visit some of the many museums or browse in the little shops along the Royal Mile. On Aug 07 to 21 departures watch the spectacular Royal Edinburgh Military Tattoo on the Castle Esplanade. (B)

Stop in Gretna Green, the first village across the border from England where eloping couples used to cross into Scotland to be married at the Old Blacksmith’s Shop. While it still holds many weddings, today it is a popular shopping stop for quality Scottish goods. Drive through the Lake District, a region associated with Beatrix Potter who worked tirelessly for its preservation. See stunning views of lakes, gentle hills and valleys. Stop in the peaceful village of Grasmere where William Wordsworth penned some of his popular lines and you can see his grave in the village churchyard. Continue to Liverpool to visit The Beatles Story where you can hear their music and learn about their lives and work. Check in to your centrally-located hotel and after dinner you may head to the world-famous Cavern Club. (B, D)

Drive south through Shropshire, close to the Welsh border and one of the most unspoiled parts of rural England. Stop in Ludlow, a town that can trace its origins back 900 years, to see the huge castle and quaint old black-and-white houses. Continue south through the lovely Welsh countryside to visit the picturesque ruins of Tintern Abbey, founded in 1131 and dissolved in 1536 by order of King Henry VIII. In the 18th century it became a popular haunt of the poet, William Wordsworth. Head to Cardiff and tour Cardiff Castle, developed in Roman times and rebuilt through the centuries. Head to a Welsh evening for dinner and some lively Welsh music and entertainment. (B, D)

Take a panoramic tour of Cardiff to see the principal areas and buildings and discover local information on a brief walking tour. A short drive will bring you to Bath to visit the Roman Baths and Pump Room, hot mineral-rich springs that have been popular since Roman times. At Salisbury Plain marvel at the prehistoric circle of vast monoliths of Stonehenge and learn about the primitive builders who managed to create such an enduring monument. A short drive will bring you into London and check in to your hotel. The evening is free for independent activities. (B)

This morning take a panoramic tour of central London to see famous landmarks including Piccadilly Circus with its statue of Eros, Nelson’s Column flanked by huge lions in Trafalgar Square, Westminster Abbey, Big Ben and the Houses of Parliament. Visit the mighty Tower of London to see the many fortresses, Beefeaters, ravens and the priceless Crown Jewels. The afternoon is free for further exploring and there is no shortage of great things to see and do. In the evening you are free for dinner. (B)

Day 9: Depart for Home or Extend your Stay in London

If you are on a 9-day tour, your program ends after breakfast. Those on a 10-day tour may schedule London sightseeing by open-top bus tour around the many famous landmarks. There are a number of different bus routes to choose from as well as a walking tour and a cruise on the River Thames. (B)

Your tour ends after breakfast. (B) 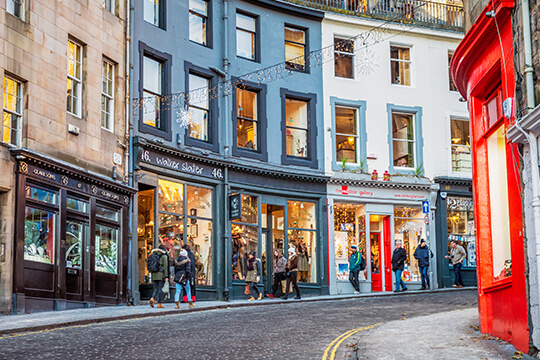 Edinburgh, the inspiring capital city of Scotland, where centuries of history meet a vibrant, cosmopolitan city in an unforgettable setting. 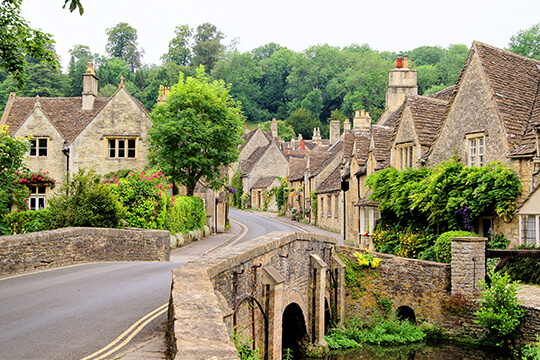 The Cotswolds are located in the south central and south west of England which also includes the Cotswold Hills which are a collection of rolling hills that rise out over the mea... 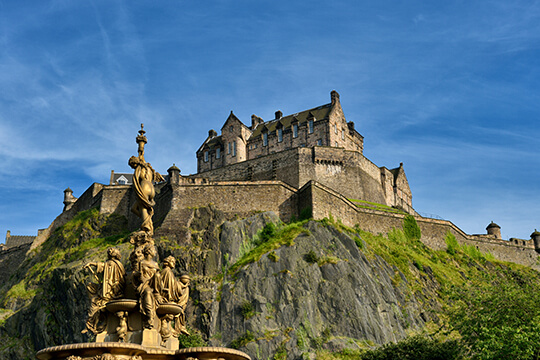 Edinburgh Castle is one of the most historic buildings in Scotland and has huge significant importance as a fortress which dominates the skyline of Edinburgh. During archaeologis...

The Roman Baths complex is a site of historical interest in the English city of Bath. The house is a well-preserved Roman site for public bathing.

Welcoming visitors for over 250 years, today the building reflects family life as it would have been at the time of Shakespeare with period furnishings. Also the garden at the b... 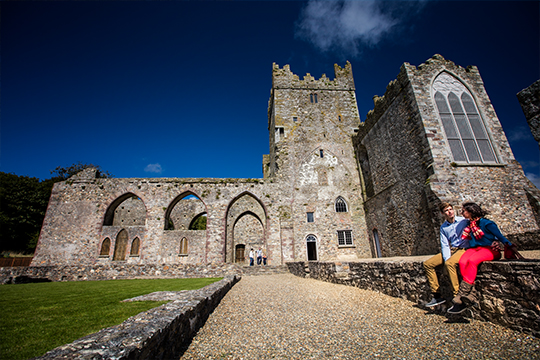 Tintern Abbey is a Cistercian abbey located on the stunning Hook peninsula in County Wexford. The Abbey was built in c.1200 by William Marshal, Earl of Pembroke, as the consequen... 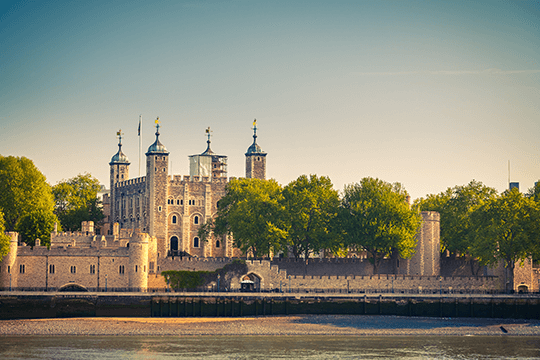 The Tower of London is an imposing fortress situated on the north bank of the River Thames in London. This historic castle was founded by William the Conqueror in 1066 and it was... 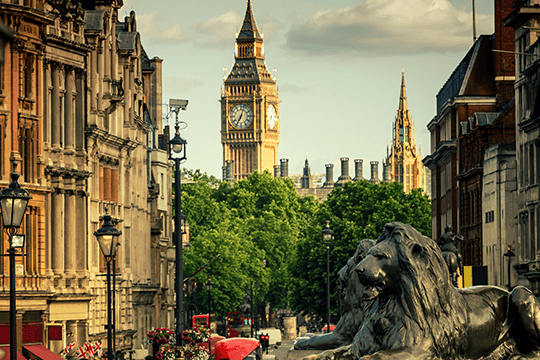 Trafalgar Square is a public space and tourist attraction in central London, England, built around the area formerly known as Charing Cross. It is in the borough of the City of W... 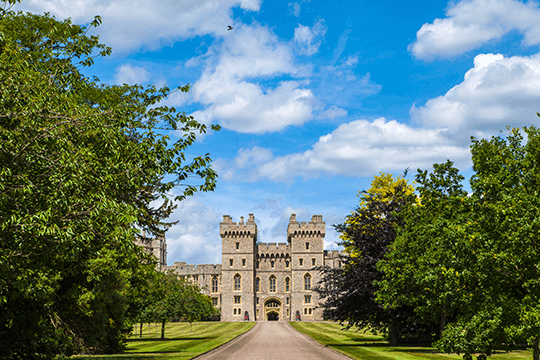 The castle remains an important ceremonial location The Waterloo ceremony is carried out in the presence of the Queen each year, and the annual ceremony of the Order of the Garte...

Below, you will find a price for Best of Britain escorted bus tour. Ask your dedicated travel advisor about our Price Promise - you can avail of the guaranteed lowest bus tour prices available. For further information on the Best of Britain Tour our trip advisors are awaiting your call on the TollFree number below or fill in the enquiry form and we will contact you.

Dates shown above are for the 10 day tour, the 9 day tour returns 1 day earlier.

Save time & money - book air and land together.

Please enter your vacation requirements in the form below. If your enquiry requires a more immediate response, please use the Tollfree & International numbers as listed down the page.

For customers based in North America, please note that as we are based in Ireland, we are 5 hours ahead of EST.

Let us show you the magic of Ireland

See what people say about the vacations we plan

"Thank you so much for planning such a wonderful trip! We enjoyed every aspect of it."

"Our trip that you arranged was fabulous! We thoroughly enjoyed our stay."

"Just wanted to send you a big Thank You. We returned from our Ireland vacation yesterday afternoon and we had a wonderful time!"

Call us here in Ireland to discuss your plans