The Wicklow Mountains are a range of mountains in the southeast of Ireland. They run in a north-south direction from south County Dublin across County Wicklow and into County Wexford. Lugnaquilla is the highest peak in the range at 925 m (3035 ft), Mullaghcleevaun at 847 m (2,780 ft) is the second highest, while the summit of Kippure is the highest point in County Dublin, at 757 m (2,484 ft).

Wicklow Mountains National Park is situated just south of Dublin. The Park covers 20,000 hectares of mountain scenery, and many roads cross through it. The most popular location for visitors to the National park is the scenic and historic valley of Glendalough.

The River Slaney has its source southwest of Lugnaquilla and then flows south along the western slopes of the mountains for some 72 km (45 mi) before entering the St George's Channel at Wexford. The Turlough Hill power station is the only pumped storage hydroelectricity scheme in Ireland; it is located on the Wicklow Gap midway between Hollywood and Glendalough.

The whole area is much frequented, especially at weekends, by Dubliners, as the region offers multiple choices of recreation, ranging from fishing to rafting to hill walking. Also in its midst lies the monastic settlement of Glendalough, believed to have been founded by St. Kevin, and now a popular tourist attraction; as well as Powerscourt Waterfall, the highest waterfall in Ireland.

The southern limits of the Wicklow Mountains are set by Croghan Mountain, the highest point on the Wicklow-Wexford border and the scene (in the 19th century) of Ireland's only Gold Rush 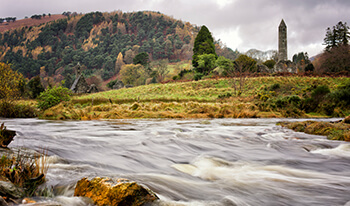